The Daleks are one of the most feared races in the universe. Their creator, Davros only has one intention, destroying all life apart from Dalek life. The Doctor has stopped them on several occasions but somehow they just keep coming back!

Asylum of the Daleks 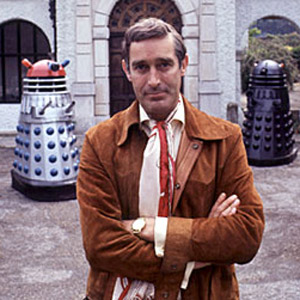 Terry Nation is pictured on the left

The idea of the Daleks was created by Terry Nation. They appeared in the second Doctor Who story called ‘The Dead Planet‘ in 1963. Raymond Cusick designed the original Daleks, since then little has changed to the basic design.

The Daleks come from the planet Skaro some time in the future, their main leader and creator is Davros. Over the years there have been many different Dalek space ships, but the classic design is in the shape of a saucer.

The Daleks have tried just about everything to take over the universe but luckily the Doctor has always stopped them. View the Dalek episode guide for more information.

I laid down the rules to her, that she was not to have any bug-eyed monsters. None of these creepy-crawly things from out-of-space, the usual nonsense of science fiction stuff… And then she came up with this Dalek business and I was livid with anger. And she said, But, honest, Sydney, they are not bug-eyed monsters, they were once living creatures with brains, and their brains had become so large that their bodies had atrophied and they needed the metal casing to support the brain.

There again, is the wisdom of being a great head of drama group. I didn’t want to do The Forsyte Saga and it turned to be a world winner. I didn’t want any bug-eyed monsters and the Dalek is what made Doctor Who Sydney Newman. BBC Head of Drama 1963