Home > The Daleks > Inside a Dalek

Originally the Dalek creature remained a mystery. In the first Dalek story all that was shown was a claw hand sliding out from under a blanket. Later in the 60’s the Dalek appeared as a mutated ‘blob’. In the 80’s the same idea was applied, a green coloured mutation. Between 1963 and 1988 it was rare seeing the Dalek interior. A Dalek mutation was clearly shown (living and speaking) in the 2005 episode ‘Dalek’.

In the first Dalek story the Doctor, Ian, Susan and Barbara captured a Dalek and removed the mutated creature inside and wrapped it in a blanket. Only the claw below was shown. Ian and the Doctor opened the top of the Dalek so that Ian could get inside, Ian controlled the Dalek allowing them all to escape.

In The Power of the Daleks a Dalek factory is shown where Dalek mutants are fitted into their casings.

Remembrance of the Daleks

Like in Ressurection of the Daleks all we got to see were the remains of the exploded Daleks, one Dalek remained active, a claw reached out and grabbed the Doctor by the neck.

The first time we got to see the inside of a Dalek clearly was in the episode Dalek where the casing opened to reveal the mutated Dalek.

The Parting of the Ways, Emperor Dalek

In The Parting of the Ways the Emperor of the Daleks creature was clearly visible in a glass casing underneath the dome.

Dalek Sec appeared more greener than the previous Daleks. The bottom half of his casing also opened. The picture on the far right shows his Human form.

Dalek Caan flew back into the Time War to save Davros. During the process Dalek Caan became insane.

The Doctor, Clara and crew of the rebel space station codenamed Aristotle go inside a Dalek via the eye.

The Doctor nicknames the Dalek Rusty. Below are the different sections inside Rusty.

Daleks use the protein gathered from harvested victims which is stored in the organic refuse disposal.

The cortex vault, the supplementary electronic brain. The memory banks that keep the Dalek pure..

The heart of the Dalek and the organic Dalek creature. 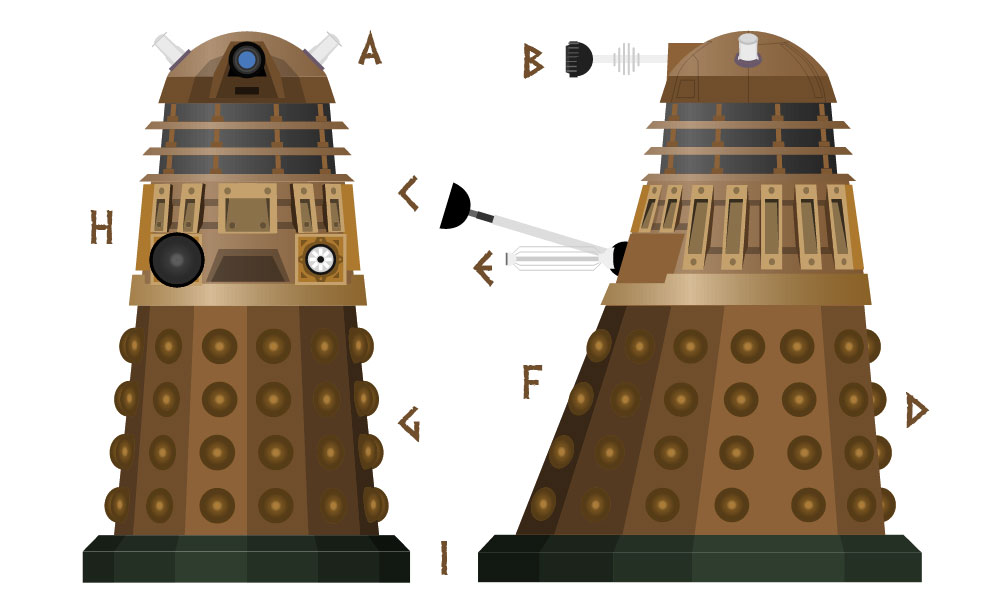 A – Lights
The Luminosity Dischargers light up when a Dalek speaks

G – Globes
Some of the Dalek Globes contain high explosive charges for offensive action or self-destruct.
The rest of the globes are used for collecting information about the current environment