Series 3 featured the Judoon, a new reptilian alien race called the Veil and the return of K9. David Tennant also made an appearance as the Doctor. 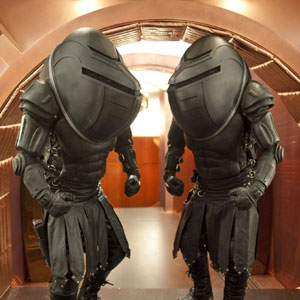 Prisoner of the Judoon

Luke, Clyde and Rani fight their most fearsome enemy yet – Sarah Jane Smith – in the second episode of this two-part, alien-busting adventure.

As the Judoon fleet approaches Earth, it’s a race against time to stop Androvax. But with Genetech’s technology on the rampage, and Rani’s parents taken prisoner, can anything stop the Army of the Infinitesimal? 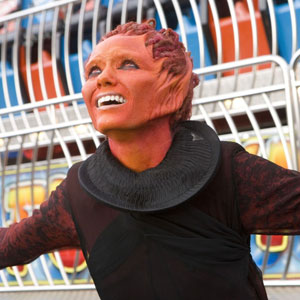 The Mad Woman in the Attic

Rani investigates strange rumours about a demon living in a funfair at the seaside. What she finds there, however, is far more alarming than that and she makes a decision that affects not only her future, but also the futures of all those she cares about…

Far in the future, in 2059, an old Rani remembers the day when her whole life went wrong. As her younger self investigates mysterious disappearances at an abandoned funfair, she sets into motion a chain of events which unleash the terrible powers of the alien Eve.

Alien Eve’s powers grow out of control, with everyone caught in her sinister and endless games. As the echoes of an ancient war threaten the modern world, the danger extends all the way to the year 2059. If Rani fails to change her own destiny, then everyone is doomed. 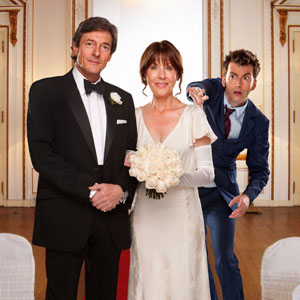 The Wedding of Sarah Jane Smith

Sarah Jane has met Peter Dalton and wants him to become part of her life, as the adventure series continues; perhaps he could become a father to Luke. But Clyde suspects that Peter is hiding a secret or two, especially when he and Rani find an empty house where Peter says his home should be.

The Doctor makes a spectacular return on the happiest day of Sarah Jane’s life but a deadly trap is awaiting them all.

As the strands of a clever and careful plan come together, can even a Time Lord save Sarah Jane on the day of her arch-enemy’s greatest triumph?

The Doctor joins the battle, as the power of the Pantheon Of Discord grows in strength, in the second and concluding part of this week’s story, but a deadly trap is waiting for them all.

The Doctor makes a spectacular return on the happiest day of Sarah Jane’s life, but is he too late to save both his old companion and Earth itself? As the strands of a clever and careful plan draw together, the two friends are separated across different time zones and must fight to save each other. For one, there’s a terrible price to pay. 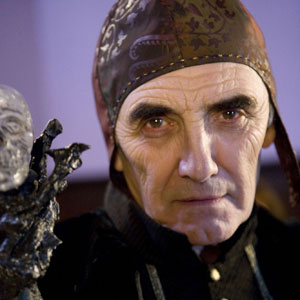 A haunted house, with mysterious whispers and secrets in the shadows attracts Sarah Jane’s attention in the first of a new, two-part adventure, written by Phil Ford and directed by Alice Troughton.

When Professor Rivers and the gang investigate an old legend, a monstrous creature appears in the night as the terrifying grasp of Erasmus Darkening reaches out from centuries past.

Sarah Jane and the gang discover the secrets of Erasmus Darkening, in the second and concluding part of The Eternity Trap, but are they too late? As ghosts from the past rise up, and the quest to find the missing children reaches a climax, it seems that nothing can stop the ancient alchemist’s rise to victory. 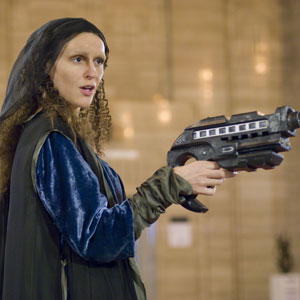 Clyde’s proudest day turns into a nightmare when he discovers that fine art can be dangerous and, when a school trip descends into disaster, the gang find themselves trapped without Sarah Jane’s help, as the awesome abomination stir.

Luke and Rani investigate the myth of the dreaded abomination, as the two-part drama concludes. With Sarah Jane trapped and beyond help, everything now depends upon Clyde.

Mona Lisa vows to release her terrifying brother from his age-old prison, but only Clyde has the key. 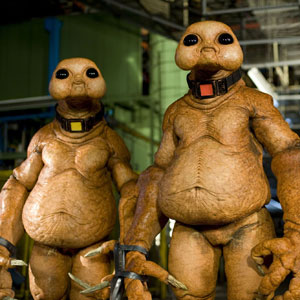 Sarah Jane, Luke, Clyde and Rani face an old enemy, the green Slitheen, in the penultimate episode of this series of The Sarah Jane Adventures.

When the Slitheen’s latest scheme is halted, their rivals, the Blathereen, arrive. Declaring peace between the planets, they offer Sarah Jane a gift – one that might change the future of the human race forever.

When the Blathereens’ gift runs riot, Sarah Jane faces the battle of her life to save her son, Luke, as The Sarah Jane Adventures concludes.

With Clyde, Rani and K9 trapped in a school under siege, and the whole of London convulsing under the alien threat, everything heads for a final showdown in the attic – and not everyone is getting out alive.