Meet Sarah Jane Smith, her adpoted son Luke and their neighbours Maria and Clyde in the first series of The Sarah Jane Adventures. 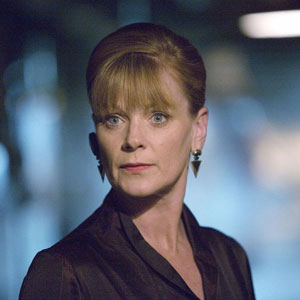 Invasion of the Bane

Maria becomes intrigued by the strange goings on at Sarah Jane’s house but before she can investigate she’s whisked away by her new friend Kelsey to the brightly coloured but sinister Bubbleshock factory. As Sarah Jane tries to find out what the mysterious Mrs Wormwood is doing at the factory, Maria and Kelsey embark on a tour which leads them into the path of a monstrous creature and a strange young boy with no name or past.

When Sarah Jane and Maria discover the secret ingredient of Bubbleshock, they realise they are the only ones who can stop Mrs Wormwood and her evil plans for the human race. 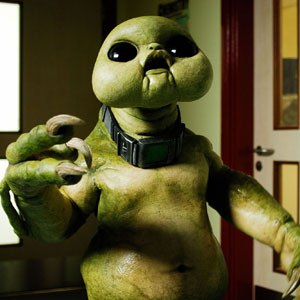 Revenge of the Slitheen

On their first day at their new school Maria and Luke soon realise that all is not as it seems. There’s a funny smell, the food keeps going off, the teachers keep farting and the new technology block is hiding some dark secrets.

With their suspicions aroused, Sarah Jane, Maria and Luke set about investigating, joined by their new friend Clyde. They soon discover that the Slitheen have disguised themselves as teachers as part of a deadly plan which threatens the future of the Earth.

But as Maria, Luke and Clyde become trapped in the new technology block in the clutches of the Slitheen and with Sarah Jane under attack from another of the alien monsters, will the gang be able to stop the Slitheen before it’s too late?

Trapped in school with the monstrous child of the Slitheen, Maria, Luke and Clyde make a timely escape thanks to some deodorant and the help of Sarah Jane and her sonic lipstick, as the drama continues.

With the Slitheen’s deadly plans to destroy the Earth well under way, the gang race back to Sarah Jane’s attic to work out how to stop them. Helped by Mr Smith, Sarah Jane’s super-computer, they soon discover that the Slitheen are going to drain all the energy from Earth using a worldwide network of giant supercapacitors.

But as a power black-out starts to spread across the world, taking Mr Smith out of action, time is running out and the gang have to rely on their wits alone. Will they be able to save the Earth before the Slitheen switch off the Sun for ever? 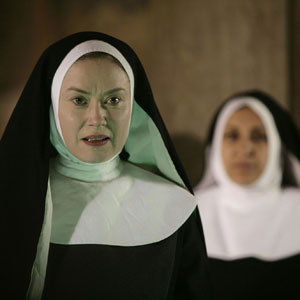 Eye of the Gorgon

Sarah Jane Smith and her young friends investigate some ghostly goings on at the local Lavender Lawns rest home, in the second two-part story of the adventure filled series.

With several residents claiming to have seen the ghostly figure of a nun, Sarah Jane, Luke and Clyde pay the home a visit to find out what’s going on. They soon discover that there is more to the story when Luke is entrusted with a mysterious alien talisman by Mrs Bea Nelson-Stanley, a resident at the home who knows a thing or two about aliens.

As the mystery unravels, the gang learn that the ghostly nun is, in fact, part of an order protecting the Gorgon – a scary alien creature who can turn her victims to stone with just one look. With the talisman an important part of the Gorgon’s plans for Earth, can Sarah Jane and the gang stop her, and avoid her deadly gaze?

As Luke and Clyde are held hostage at St Agnes Abbey, the monstrous Gorgon and her sinister group of nuns manage to get hold of the alien talisman from Sarah Jane and Maria, as the drama continues. This brings them one step closer to their evil plan to open a portal and unleash more Gorgons on Earth.

With her dad, Alan, turned to stone by the Gorgon’s deadly gaze, Maria sets out to get him back to normal before it is too late. Back at the Abbey, Sarah Jane and the gang try to stop the nuns from opening the door to the Gorgons’ alien world. But will they be able to avoid the Gorgon’s stony eyes for long enough to save the day? 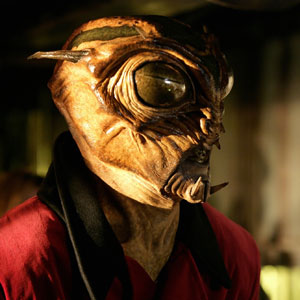 Sarah Jane and Maria investigate the mysterious disappearance of a local boy, Lance Metcalf, while Luke and Clyde take a visit to Combat 3000 – a laser tag game designed to train the ultimate warrior – in the third, two-part adventure of the drama series.

When Sarah Jane and Maria dig further into Lance’s unusual disappearance, they soon discover that a number of children have gone missing across the country – all in cities with a Combat 3000 and all during freak-weather storms. 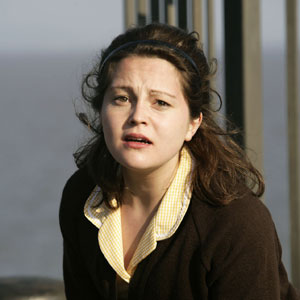 Whatever Happened to Sarah Jane

Maria wakes up to discover that everyone apart from her has forgotten Sarah Jane Smith ever existed, even Luke. In reality, an alien being has found a moment in time where a teenage Sarah Jane lost a friend in an accident, but has swapped them around, imprisoning Sarah Jane in some kind of limbo.

Now Angela survives and because Sarah Jane never existed, the world is on the brink of nuclear annihilation. After Maria herself is stolen from time and erased from everyone’s memories, it’s up to her dad, Alan, to rescue Sarah Jane and Maria so they can set time back on the right course… 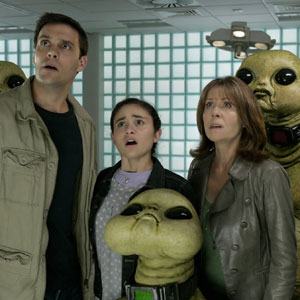 Sarah Jane and the gang face some old alien enemies again, along with an altogether unexpected foe, in the final two-part adventure of the series. A news report on a couple looking for their missing son, Ashley, brings a surprise for Sarah Jane when she discovers that the missing boy looks exactly like Luke. And when Mr Smith, Sarah Jane’s super-computer, confirms that Luke is a genetic match with Ashley, Sarah Jane sends him back to live with his “parents”.

But, with no knowledge of his former life, Luke finds it hard to fit in and, when he tries to escape, he makes a startling discovery about who his parents really are.

Sarah Jane, meanwhile, makes some investigations into the Pharos Para-Science Institute – a research unit that has been conducting experiments using alien technology.

Maria and her dad, Alan, dig deeper into the mystery of Luke’s new parents and discover that Luke has actually been kidnapped by the Slitheen, in the final episode of the popular children’s adventure series.

There are more shocks in store when Sarah Jane and Maria find out that Mr Smith, Sarah Jane’s super computer, is one of the bad guys.

With Clyde nowhere to be seen, Luke in the clutches of aliens and no Mr Smith to help, things aren’t looking good for Sarah Jane and Maria. But just what do the Slitheen want with Luke and who, or what, exactly, is the Xylok?