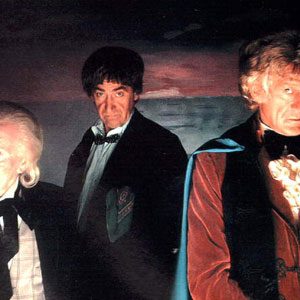 A mysterious black hole is draining away power from the Universe. Even the Time Lords are threatened. The Doctor is also in trouble. Creatures from the black hole besiege UNIT Headquarters. The only person who can help the Doctor is… himself.

The Time Lords bring together the first three incarnations of the Doctor to discover the truth about the black hole and stop the energy drain. The Doctors and their companions travel through the black hole itself, into a universe of anti-matter. Here they meet one of the very first Time Lords – Omega, who gave his race the power to travel through time. Trapped for aeons in the black hole, he now plans to escape – whatever the cost. 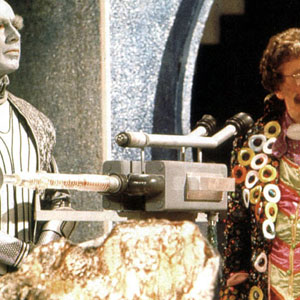 The Doctor and Jo take the TARDIS on a test flight. They arrive on a cargo ship, that appears to be crossing the Indian Ocean in 1926 but is in fact trapped inside a Miniscope – a banned peepshow of miniaturised life-forms… 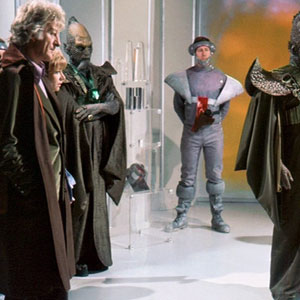 When the TARDIS accidentally brings the Doctor and Jo aboard Earth cargo ship C982, they find it under attack. The crew perceive the Doctor, Jo and the attackers as Draconians, whose empire currently rivals Earth’s for control of the galaxy. But the Doctor and Jo see only Ogrons – brutish, simian mercenaries who steal the cargo, including the TARDIS, and head off into space.

The Doctor’s investigations take him to Earth, the Moon and then to Draconia itself. He discovers that the Ogrons are employed by his sworn enemy, the Master, who is attempting to provoke a war between the space empires. The Doctor suspects the scale of the plan is too grand for the Master, but even he is shocked to discover the identity of the far deadlier foe waiting in the wings… 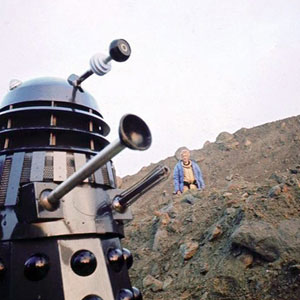 Planet of the Daleks

Planet of the Daleks Synopsis

Injured after a shoot-out between his old nemesis the Master and the Ogrons, slaves to the evil Daleks, the Doctor sends a message to the Time Lords, asking them to pilot his TARDIS and follow the Daleks to their new base. After he slips into a coma, it falls to his assistant Jo Grant to explore the planet where the TARDIS finally materialises. She meets a party of Thals and is left in hiding aboard their crashed spaceship while they go to the Doctor’s aid. On his recovery, the Doctor learns of their mission to destroy a party of Daleks sent here to discover the native Spiridons’ secret of invisibility.

Not only must the Doctor contend with the Daleks’ new scheme, but he must try to stop them unleashing a plague that will exterminate all organic life. When a rescue ship of Thals arrive, they bring with them darker news still – somewhere on Spiridon 12,000 Daleks are waiting to emerge and take what they believe is their rightful place as the Universe’s supreme beings! 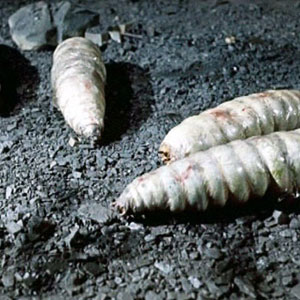 UNIT is called in after a miner from the Welsh village of Llanfairfach is found dead, his skin glowing bright green. Jo joins forces with a local environment group, led by Professor Clifford Jones, while the Doctor investigates the nearby plant of a company called Global Chemicals.

They discover that the mine workings are full of giant maggots and green slime – both lethal to touch – that have been produced by chemical waste pumped from the Global plant. Stevens, the Director of Global has been taken over by the BOSS – Bimorphic Organisational Systems Supervisor – a computer with a will of its own. The BOSS plans to seize power by linking itself to every other major computer in the world, but the Doctor uses a blue crystal – a souvenir from a brief visit to the planet Metebelis 3 – to break its hold over Stevens, who then programs it to self destruct…