When Doctor Who returned in 1996 the TARDIS interior was given a completely new look. It was a huge contrast to what we’d seen previously, this design was a lot more gothic in style.

A New Era, A New Design

The console room itself was a lot larger than any of the previous designs. If you took away the darker and wooden feel the console was very similar to the original design. 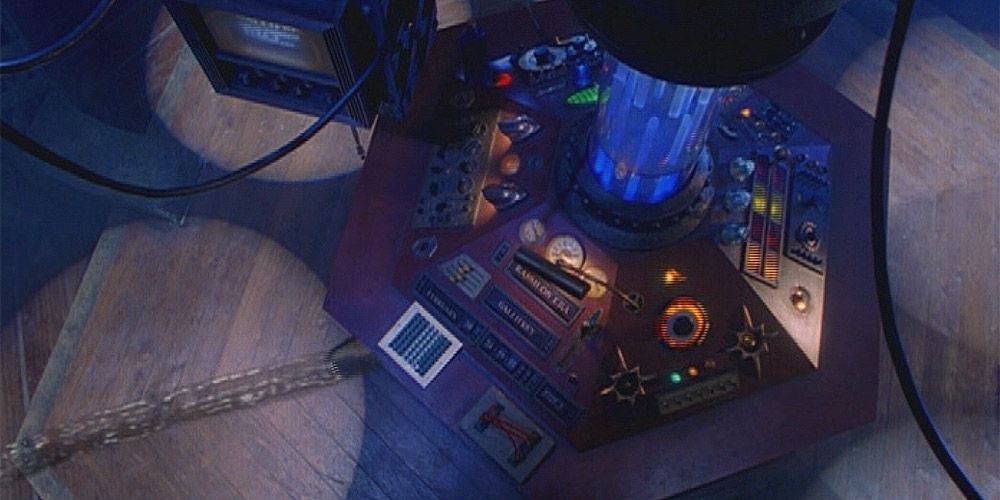 The new TARDIS interior was a lot darker than the original design, it had more similarities with the season 14 secondary control room than any of the previous redesigns. Even the common TARDIS roundels had gone. The TARDIS appeared to have a wooden floor with large stone walls. It resembled a large edwardian library.

Cloister Room and the Eye of Harmony

The Cloister room was the only other room shown inside this version of the TARDIS interior. It had a grand gothic interior, even more so than the console room. At the center of the cloister room was the Eye of Harmony. The Eye of Harmony is an artificial black hole created by the Time Lords to provide energy for Gallifrey and their technology. The eye of Hamony was the TARDIS’s primary power source.

The pictures below show the TARDIS doors leading outside from the interior. The second photo shows the TARDIS key.

The TARDIS had a standalone monitor just above the console, only text was displayed here, it’s not known if this could display images. This version of the TARDIS could also display star systems on the ceiling.

Artwork for how the TARDIS appeared in the 2003 animated story Shada.